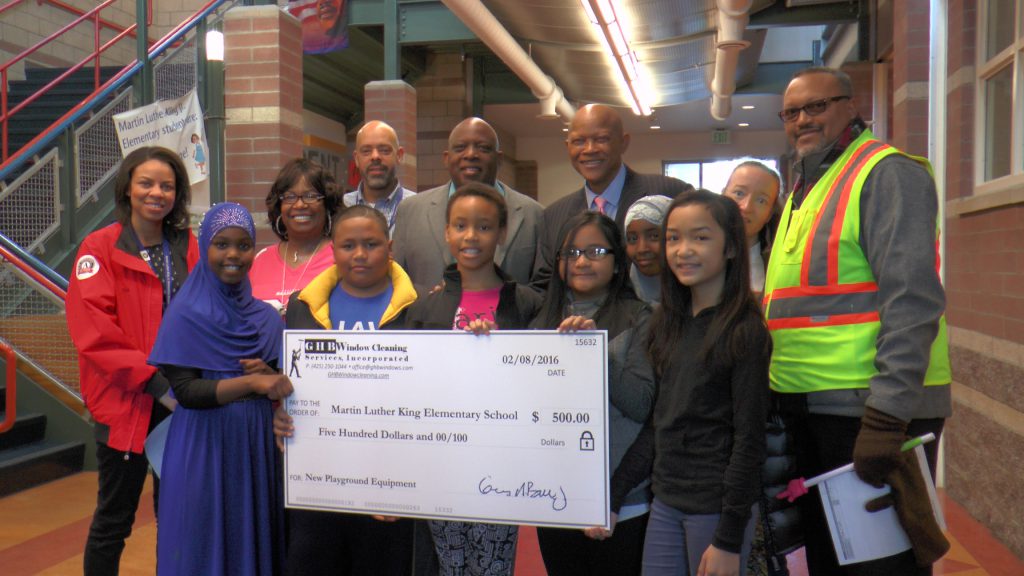 KIRO 7 viewers are stepping up after our story about a South Seattle school in need of sports equipment.

Supersonics legend and current P.E. teacher, Donald “Slick” Watts, has gotten dozens of calls after telling KIRO 7 of a $500 donation from his friend at GHB Window Cleaning.

On Monday morning, George Brewer presented the $500 check at an assembly at Martin Luther King, Jr. Elementary School.  Watts says it’s all about making sure kids get physical activity.

“With all these computers in the world we need to do something to get kids moving,” said Watts.  “And this is a start.”

The donation isn’t lost on the students.

“I’m looking forward to playing 4 Square,” said 5th Grader Kayla Dumlao.  “And I think the donation is very helpful to the school.”

“It’s a pretty good donation and a big donation too,” said Naylani Mwamba-Hunter.  “I think it’s a pretty cool thing for our school, plus a lot of the balls here have gone flat.”

Watts is encouraged by the offers for more donations and hopes more businesses will step up.

“I got 40 soccer balls coming and they are $17.95 a piece,” said Watts.  “So that’s why we are asking other companies, especially Cascade Masonry. Don’t forget what he told me. I’ll be waiting, because we need more.”

Watts says this all just reaffirms what he’s known since he moved here 40 years ago to play for the Sonics.

“Seattle, Washington is the best place in the world to live,” said Watts.

With Monday’s donation, the school is also getting 20 4-square balls, 10 basketballs, and about 30 jump ropes.

The Senior Housing Assistance Group (known in the Pacific Northwest as SHAG) has grown to become the largest operator of affordable senior living communities in the Puget Sound and is continually investing into each community by teaming up with GHB Window Cleaning Services Inc. to provide exterior cleaning & maintenance at SHAG properties throughout Washington.

The partnership builds upon SHAG’s mission statement, “Enhancing & enriching the lives of people through affordable housing” by improving the value & quality of each housing structure to guarantee that the residences that live there can be proud to call it ‘home’.  Along with assurance that each rental space, in over 28 communities growing from Bellingham to Olympia, is a safe and pleasant environment.   These values are a reflection of the core standards of GHB Inc., which is to help the Pacific Northwest sparkle & shine through high quality professional cleaning services.  Window cleaning at several SHAG communities have already started in the region and in September, mid-rise pressure washing & window cleaning will take place in SHAG communities around Seattle.

“It is such a great opportunity to team up with SHAG who empowers seniors with respect & dignity through affordable housing.  We all have aging parents that deserve the best and to be able to offer superior maintenance services to these communities & our loved one’s is an honor,” said George Brewer CEO of GHB Inc.

SHAG continues to lead the way for affordable senior housing while keeping their focus on whom they serve.  The new partnership reinforces SHAG’s commitment to ensure that each community ‘Sparkles’ with continued upkeep.

GHB Window Cleaning Inc. draws up a winning game plan to help the VMAC prepare for the 2015-2016 Season

Bellevue, WA July 31, 2015 – With Seattle patiently waiting for football season, the Virginia Mason Athletic Center is supporting local businesses as they gear up for training camp.   GHB Window Cleaning Inc., a small Seattle Business, has been working hard preforming exterior window cleaning and top –bottom pressure washing services at the facility; helping prepare the VMAC for the return of the 2015 Conference Champions.  However, it takes a great game plan to execute work at heights over 120 feet.

Although this game plan may not consist of X’s & O’s or a quarterback sneak, it does include a route to safety that always leads to a win.  Prior to work commencing, Labor and Industries requires all contractors to have an Accident Prevention Program and with the technicians working as high as 120 feet a Site Specific Safety Plan or Fall Protection Work Plan is required.  This plan identifies fall hazards of 10 feet or more and informs the technicians and the facility of the methods of fall protection being used as well as a detailed rescue strategy if needed.  The department of Labor and Industries & OSHA imposes heavy fines for companies that do not follow these regulations.  The laws are inforce to keep workers safe & limit liability.  Because of the safety preparations executed beforehand and a winning game plan, GHB Inc. has a perfect, flawless safety record; Win!

George Brewer, President of GHB Window Cleaning Inc., recognizes that safety is always priority one and has on-going employee training & offers his expertise to other local business’s in the area.   He said, “Falls are one of the most common serious work related accident and so many owners are unaware of their obligations when it comes to laws that govern fall protection both on the State (WISHA) & Federal (OSHA) Level. … Our game plan simple; prepare & train with safety and execute with quality service.”

To learn more about working at heights & fall protection safety, visit us at http://ghbfallprotection.com or call (844) 438-4429. 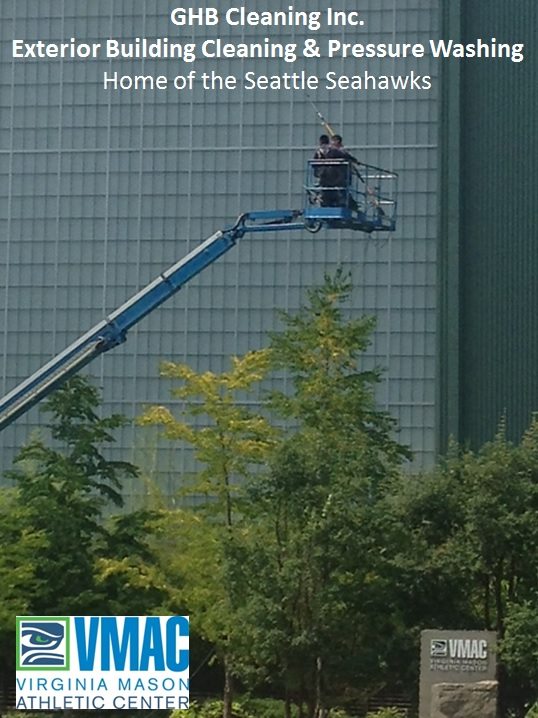 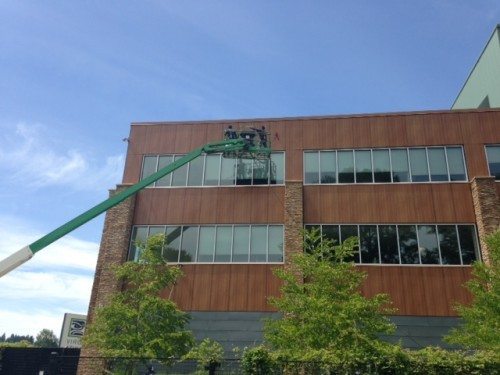 Bellevue, WA July 7, 2014 – While Seattle waits for football season, the Virginia Mason Athletic Center is supporting local businesses as the facility gets ready for training camp.   GHB Window Cleaning Inc., a small Seattle Business, has been working hard preforming exterior building cleaning and pressure washing services at the facility; helping prepare the center for the return of the Champions.  Sporting team franchises continue to provide great economic stimulus for local businesses throughout the area and GHB Window Cleaning Inc. is just one of several local trades who benefit.

George Brewer, President of GHB Window Cleaning Inc., was excited to be able to offer his championship services to the franchise.   He said, “It’s important to continue to show the community how a flourishing sports team impacts the economy at the local level and we are just grateful to be able to offer our services to the team. … Our win is simple; provide outstanding exterior building maintenance solutions throughout the Seattle area.

The commercial is just the beginning for the local Seattle Maintenance Service Company.   In a brief statement from CEO, George Brewer, he is excited to reveal, “With the quality of service we bring to the table, we know that this endorsement is the first of many…  be on the lookout for more commercials from our satisfied customers.”  He also wanted to include that window cleaning is just one of the several services they provide.  Gutter cleaning, pressure washing and roof cleaning are but a foretaste of the multi-faceted company.  With three divisions that include Commercial Exterior Building Services & Fall Protection Safety plus Education, GHB Window Cleaning Inc., is surely winner!

A pre-release of the local TV commercial starring Slick Watts and GHB Window Cleaning Inc., can be viewed at their website.

Bellevue, WA – January 30, 2014 — GHB Window Cleaning Services Inc. (https://ghbwindowcleaning.com//) caught many Seattle & Bellevue Window Cleaning Companies off guard in 2013. And they definitely helped ‘Let the Sun Shine In’ all over Washington; from Spokane to Seattle.  Throughout the year they procured contracts from several top entities including University of Washington, Washington State University, Sound Transit and The City of Everett.  But clearly, their vision does not stop there.

As they look forward into 2014, they will continue to provide Bellevue & Seattle quality window cleaning to existing clients and build relationships with property managers and home owners throughout the Northwest.  And after talking to CEO, George Brewer, he was thrilled to announce, “We will also be ramping up GHB Construction Services Inc. to assist building owners and property managers with Exterior Building Maintenance needs.”  From Building Cleaning and Pressure Washing to Waterproof Sealing, they will be able to provide each client the best full service, building exterior maintenance package, along with their proven great Window Cleaning Services.

Visit us at the below sites: